It has been revealed that Arsenal boss Arsene Wenger has likened German youngster Thomas Eisfeld to club legend Robert Pires. 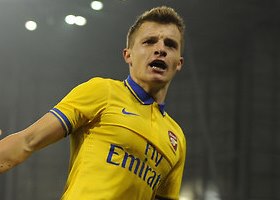 The 20 year old attacking midfielder featured in their Capital One Cup win over West Bromwich Albion.

The Frenchman said: “He is a Pires type. He appears to be in the box without being noisy and appearing suddenly. When he is there, he finishes well.

“Thomas has that kind of quality that some midfielders have – not many. They have the timing to get in dangerous situations.

“When they have those dangerous situations, they are like snakes.

“They bite you to death because they don’t miss their first touch. He is cool enough in front of goal and he finishes well.”