It has been reported that Arsenal boss Arsene Wenger’s relationship with Cesc Fabregas remains close, despite his move to Chelsea. 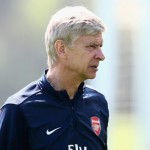 The Gunners secured a first-option buy-back clause as part of the £35million deal which saw Fabregas return to Barcelona.

Gunners boss Arsene Wenger had considered taking up the option once it became clear Barca were looking to sell the midfielder.

But with the likes of Aaron Ramsey, Mesut Ozil, Jack Wilshere, Mikel Arteta and Alex Oxlade-Chamberlain already at the club, Wenger decided his squad did not need another creative midfielder, says the Daily Mail.

Wenger and Fabregas continue to have a close relationship, while it is understood returning to north London was Fabregas’ preferred destination.

Despite the fact Fabregas’ move to Chelsea has been mooted for several days, there remained an element of surprise that Wenger snubbed the opportunity to re-sign Fabregas from within the club yesterday.