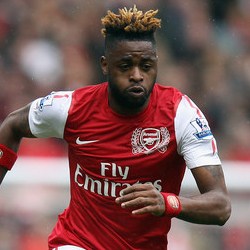 Arsene Wenger has declared that Alex Song is not for sale.

The Arsenal boss was adamant that the Gunners have received no approach from Barcelona.

Cameroon midfielder Song, 24, has been linked with a £12million move to the Nou Camp.

“Song has three years contract he’s not in the same situation as Robin Van Persie.

“In Spain the newspapers are not really serious. We’ve had the experience of that.

“We’ve never had any contact with anybody from Barcelona.”