Reports are out claiming that Arsenal boss Arsene Wenger won’t get carried away with their FA Cup exploits. 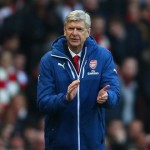 Wenger is just pleased to be still in the hat after victory over Middlesbrough.

“Maybe the highest number of teams in the Premier League have gone out but we still have some big teams in there. Let’s wait for the draw.

“We have a week now to prepare for the Crystal Palace game and I did rotate today as well. I changed two defenders from our last game. It shows that everybody’s focused and has the quality to compete for places in the team. At the moment, in every single position, we have two very good players.”