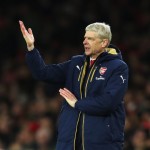 Reports have emerged claiming that Arsenal’s Arsene Wenger insists he is not at all thinking about the Premier League title.

The Gunners lost 2-1 to Swansea City on Wednesday night which sees them slip six points behind league leaders Leicester City and remain three in arrears of second-placed Tottenham Hotspur who they meet on Saturday.

The loss comes on the back of Sunday’s 3-2 defeat at Manchester United and Wenger says it is a case of righting those wrongs instead of dreaming about premiership glory.

“At the moment I am worrying about our results,” he said.

“We just lost three games and that is always a very disappointing moment for the team. At the moment we don’t dream.

“We have to be realistic and come back to what we do well, the basics.”

Asked if Arsenal can still win the league, Wenger responded with: “I don’t know.

“It is very difficult to say because everybody drops points. At the moment, I believe that we need to get back to positive results before we speak about the Championship which is at stake at the moment.

“Let’s focus on winning the next game and not talk about the title tonight.

“I’m not in the mood to do that tonight. It is a big disappointment for us to swallow this and we need to bounce back.”

Joel Campbell opened the scoring for the Gunners in the 15th minute before Wayne Routledge and Ashley Williams scored either side of the break to give the visiting Swans all three points at the Emirates Stadium. Arsene Wenger Adamant Arsenal Will Only Sign The Right Players