It has been reported that Arsene Wenger is not ready to write off Manchester United’s title challenge just yet. 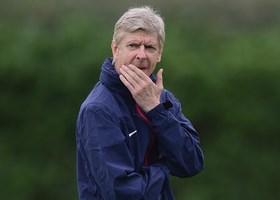 The Arsenal boss is refusing to get carried away with league positions just yet, as the Gunners are set to travel to Old Trafford next month the weekend after they host fellow pacesetters Liverpool.

The Frenchman said : “It is too early. They are not out of the title race,”.

“We are only two points in front of all the others. Are Man United out of the title race? No, but of course 10 points starts to be a little gap.”

Wenger continued: “If you have the choice, you want to be in the race at the top, but you cannot rule Man United out today.

“They have big players, big experience and they are a big club.

“It (points advantage) is three games basically, that is very quick in our league.”