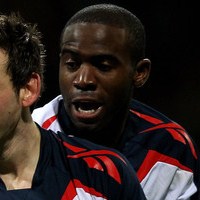 Muamba began his career with Arsenal joining as a schoolboy in 2002. He made two appearances in the League Cup before joining Birmingham in 2007.

And as the world of football unites to support the player, Wenger said: “This is, of course, a massive shock to us all and we just hope that Fabrice will pull through safely.

“You pray that the damage will be repaired and that Fabrice will come out healthy and we will see his smile again. That is all you wish for. ”

“As a man, Fabrice has a positive attitude towards life, he is full of determination and has a great desire. Everyone at Arsenal has huge respect for Fabrice.

“Even after he left us, he often passed by to say hello and speak about how it was going for him. We feel very deeply attached to him.

“He is what you would call a committed player. His hunger and determination was so big.

“When he was younger, he had massive players in front of him at Arsenal, but I felt he had reached the level to play in the Premier League, so we let him go and he has proved his quality.

“A football player always remains attached to where he was educated. Fabrice had his friends from childhood here and they remain your friends forever.

“We are all thinking of Fabrice, his family and everyone close to him.”