It has been reported that Arsenal boss Arsene Wenger is cool on reports linking Fulham striker Dimitar Berbatov with a move to the Emirates. 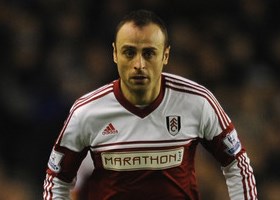 The Gunners boss is facing a striker crisis with Olivier Giroud and Nicklas Bendtner sidelined with ankle injuries.

Reports claimed Wenger was prepared to lodge a £2million bid for Berbatov, but speaking ahead of his side’s FA Cup third-round tie against Tottenham the Frenchman denied any interest in the former Manchester United striker, although appeared to keep his options open.

“Berbatov is a not a name we have considered, at the moment,” he said.