Reports are out claiming that Arsene Wenger was pleased with the way his Arsenal side performed in their 3-0 victory over Hull City on Sunday. 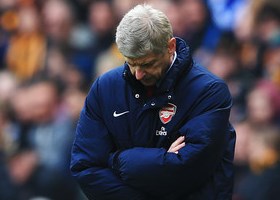 The Gunners retained fourth position on the Premier League table with a solid display at the KC Stadium which saw Aaron Ramsey score on his first start since Boxing Day and Lukas Podolski net his second double in two starts.

After the triumph, the Frenchman spoke highly of his Arsenal team who controlled the FA Cup final dress rehearsal against Steve Bruce’s Tigers.

Wenger told Sky Sports : “We kept a clean sheet, we scored three goals and overall, I believe that performance was good,”.

“We were tested in the first half from a very physical game. We responded with great movement and scored.

“In the second half, we controlled and it was easier and overall, it’s a convincing win.

“We looked dangerous to score goals again. We had a few away games where we looked toothless and to think our combination game and our speed in the game was back and they looked like scoring.

“In the Premier League, you’re always a bit apprehensive before every game and you want your team to perform as well as you can and when your players are out, you have to cope with it.” Arsenal, Man City To Do Battle For Antonio Sanabria