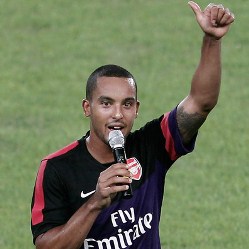 It has been revealed that Arsenal boss Arsene Wenger is weighing up whether to sell Theo Walcott in the coming days.

The Daily Mail claim that the 23 year old England international has entered the final year of his contract at the Emirates and has yet to agree terms on a new deal.

Chelsea and Liverpool have been linked with a move for the former Southampton winger and Wenger may decide to cash in before the end of the transfer window.