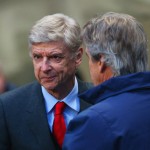 Reports are out claiming that Arsenal boss Arsene Wenger was proud of victory over Manchester City.

Goals from the impressive Santi Cazorla and Olivier Giroud gave the Gunners an unexpected 2-0 success at the Etihad Stadium and considerably enhanced their Barclays Premier League top-four prospects.

The French tactician told Sky Sports: “I felt that we were well-disciplined, well-organised, had a good solidarity and overall we kept a good control of the game. We could even have done better on counter-attacks.

“People are very quick on their judgement – you forget that we had many defenders out all season. As you saw today the centre-backs are a good partnership and it takes time to get back to that level.

“It’s down to everybody doing their job. The first goal dictates the way of the game in these big games and today we scored first.

“We looked in control away from home and we finally got a big win in a big game away from home. What is pleasing is that reinforces the belief of the team. To feel that you can do well is very important.

“The five months in front are very important in the lifespan of our team. They will determine our season.”