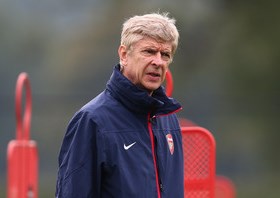 The Frenchman believes home advantage could be a deciding factor but stopped short of ruling out the holders from retaining their crown.

The 63 year old told Arsenal Player : “Brazil plays at home in South America so usually it’s a South American team who wins there,”.

“That will be a huge disappointment if Brazil don’t win it and Germany could be the surprise maybe this time.

“You can’t dismiss Spain because they have been so consistent and have such an experience in their side that you could say they will still be there.”