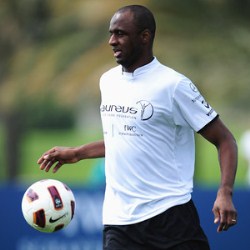 It has been revealed that Arsene Wenger is ready to bring Manchester City midfielder Patrick Vieira back to the club – as a coach.

The Daily Mail has reported that the veteran French midfielder is set to be released by Manchester City in the coming weeks, having made just 16 starts for them this season.

It is said that the former Inter Milan star wants to stay in England but is not interested in playing on at a lower level.

Arsene Wenger is reportedly considering Vieira for a coaching role and it is possible Roberto Mancini could offer the Champions League veteran a similar position.

Vieira, now age 34, could be just what Arsenal need to give them a winning mentality and provide guidance for their young players.

It would be an emotional reunion for Wenger and Vieira, who had nine successful years together at Arsenal until 2005.