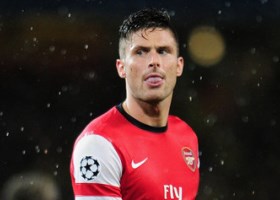 The Daily Mail revealed that the Frenchman knows he is drastically short of striking options, with Giroud his only recognised centre-forward.

It is said that Wenger is worried the French international is approaching the ‘red-zone’ and made a new striker a January priority.

The 27 year old former Montpellier striker has started all of Arsenal’s Premier League and Champions League games this season, raising concerns of burn-out. Arsenal Target Sam Byram On The Brink Of Joining Everton