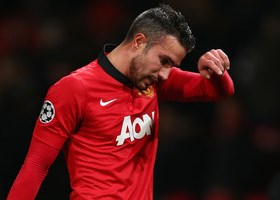 It has been reported that Arsenal boss Arsene Wenger has refused to comment on Robin van Persie’s frustrations at Manchester United.

The former Arsenal star left in 2012 but has been linked with a move back to the Emirates.

The Dutch international striker was outspoken in the aftermath of United’s Champions League defeat at Olympiacos.