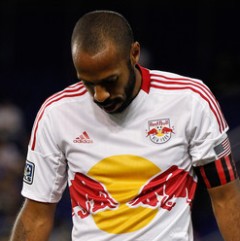 It has been reported that Arsene Wenger could still re-sign Arsenal legend Thierry Henry when the transfer window opens, but remained coy over Barcelona striker David Villa.

The Fenchman said: “I’ve not lost interest in him (Henry). He’s still coming to practise with us.

“Our relationship is very close but, at the moment, I think he has had a second spell at the club that was very successful. You have to be cautious that it’s not one time too many.

“I have not completely ruled it out but I haven’t spoken about it with him at all.”

The Gunners have been linked with a string of strikers, among them Barcelona’s David Villa.

Asked directly about Villa he said: “Any interest we have in any players has to be kept secret at the moment. I cannot come out with any names.”