It has been reported that Arsenal boss Arsene Wenger remains unhappy over Frank Lampard’s move to Manchester City. 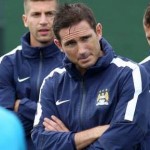 The Premier League champions confirmed on Wednesday that the 36 year old has joined the club on a six-month contract until January 31 when he will move on to New York City FC for the MLS season.

Lampard’s deal to the Etihad has been questioned by some following City’s relationship with the American franchise, with Wenger one of those to express his displeasure at the transfer.

“It was a surprise that he went to Manchester City,” Wenger said.