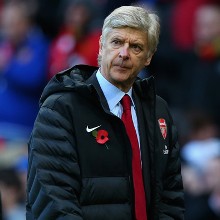 The Arsenal boss insists he said “nothing special” to Van Persie when the pair met and claimed he was not concerned by the fact his former star player scored.

Wenger said: “Honestly that doesn’t bother me at all. It doesn’t matter.

“What you want is to win the game – you don’t care about who scores in their team.

“I am disappointed of course, because we had a lot of the ball, but we were not very efficient in our final third or in their final third.

“Then you feel the domination was a bit illusionary – we had a lot of the ball, but they created more chances and deserved to win the game.”