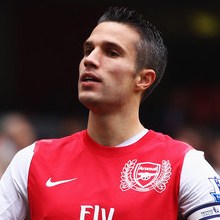 Van Persie insisted before scoring twice yesterday against Sunderland that he remains committed to the club, but Wenger concedes Arsenal are powerless to make him sign an extension to his current contract which expires in 2013.

“Robin knows we are ready to talk about a new contract. The ideal situation is he extends his length of contract, but if he does not we have to respect that.”