Reports are out claiming that Arsene Wenger insists his Arsenal side is not lacking in confidence. 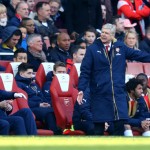 The Gunners were beaten 2-1 by Watford in the FA Cup quarter-final on Sunday which was another poor result that could see them finish the season without a trophy.

After dominating possession but failing to put away the chances created, Wenger was asked whether or not he felt his side was struggling confidence-wise but he believes recent outings show they are not.

“It is nothing to do with confidence. Yes, of course [the team have enough confidence],” he said.

“The recent results aren’t showing that but we are playing against good teams and the recent results – 2-2 at Tottenham with 10 men and a 4-0 win at Hull – I can’t see why we should have no confidence.

“We had enough technical superiority to win the game and score goals. It’s always difficult but it is our job to prepare for the next game.”

Arsenal will next meet Spanish giants Barcelona in the Champions League Round of 16 second leg at Camp Nou on Wednesday night.