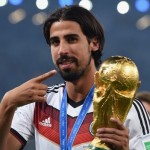 It has been reported that Arsenal boss Arsene Wenger says their pursuit of Real Madrid midfielder Sami Khedira is over.

The French tactician says the club are open to bolstering the squad further but insists they are not close to completing any deals.

“I don’t know who has put Khedira on the market – is it his agent or the press?” Wenger said.

“We were never close to signing him. Jack Wilshere is back fit and in midfield we have offensive midfielders and quite a few box-to-box players.”