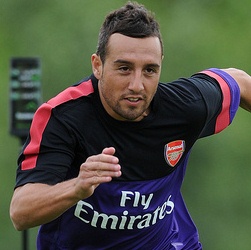 The 27-year-old Spanish international attacking midfielder has signed a “long-term contract”, the club said on Tuesday.

The Arsenal boss said: “Santi Cazorla is a great signing for us. He is a player with good experience at both club and international level, who will add significant quality to our squad.

“He is a versatile, attacking midfield player who can play comfortably on either side of the pitch or centrally. He has good pace, is technically gifted and will be a huge asset to Arsenal. We are delighted that he is joining us.”

Cazorla, who was voted Spanish Player of the Year in 2007, added: “I’m so happy to be joining Arsenal. This is a club with great players, a fantastic stadium and huge support. The club has one of the best managers in football and their style of play is recognised and admired all over the world.

“I’m so excited to be joining one of the greatest teams in Europe and also in the Premier League. I will do my best to help Arsenal challenge for trophies and make all the supporters happy.”