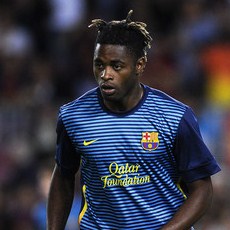 Arsene Wenger has admitted that selling Alex Song to Barcelona was a gamble.

Diaby, plagued by injuries during his time at Arsenal, limped off after just 18 minutes of Saturday’s 2-1 defeat to Chelsea.

Wenger said: “It was a gamble but I was calculating that Jack Wilshere was coming back.

“We’ll see if it was a good decision at the end of the season.”