It has been revealed that Arsenal are set to hand Arsene Wenger a new two-year deal. 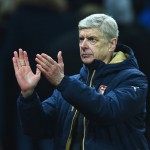 According to The Sun, the Frenchman signed a three-year extension after the Gunners’ FA Cup win over Hull in 2014.

He’s got 18 months left to run on that contract, and he’s up for another two years after that.

Wenger has steered his side to the top of the Premier League as they look to end a title drought dating back to their unbeaten season in 2003-04.

It’s claimed the club will announce Wenger’s new deal in the summer.