Arsenal boss Arsene Wenger has revealed that his transfer work is not over. 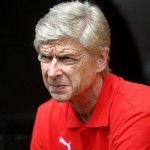 The French tactician has been busy again this summer with the addition of Chile forward Alexis Sanchez and Colombia goalkeeper David Ospina, as well as England youth international Calum Chambers and Newcastle defender Mathieu Debuchy.

Those deals mean, for the first time in several years, that Wenger has his new recruits in well ahead of the start of the season – even if he may not yet be finished in the transfer market.

“I’m very happy because I did what I wanted, and I am still open to do more,” he said.

“Let’s not forget that we are at August 1 today, and the transfer window closes on the 31st. For years, it’s a long time I didn’t sit with you here on the first of August having done quite a lot.

“We are a bit ahead of what we usually do, because the availability on the market was bigger and earlier than before.”