Reports have emerged claiming that Arsenal boss Arsene Wenger has taken aim at Luiz Felipe Scolari over Brazil’s 7-1 thrashing in the World Cup semifinal to Germany. 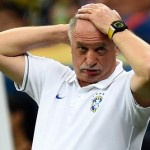 The French tactician branded the tactics of former Chelsea boss Scolari as “horrendous”.

“From a tactical point of view, honestly, it was absolutely horrendous. Of course, it would be too easy for me to point the finger at the manager. I have been a coach long enough now to see these things happen to me and sometimes your team confidence can just go completely but I am a long-term admirer of Brazil on the football front.

“In the end I think you’ve got to give the credit to the German team though because I sat there and just saw them handle all the pressure, creating wave after wave of attack even though they were playing the most famous footballing nation in the world on their home turf. On the night I think many people shared that feeling as well.

“Obviously, emotionally when you lose by such a big score it is impossible to deal with but I felt more pain for what happened to Brazil because they just completely fell apart. Even if you take 11 young kids of 18-years-old and make them play against Germany, they will not concede four goals in six minutes. To me it just shows that they were paralysed on the pitch.”