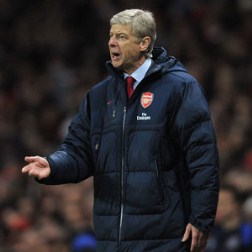 Arsenal boss Arsene Wenger has urged his team to focus over the Christmas period and gain the points which will make a top four position a realistic proposition.

The festive period proved fruitful for the Gunners last term as they beat Chelsea and drew with City, and this year, having climbed to fifth place, they face much easier opponents in the form of Wolves, QPR and Fulham.

“”We know we have an opportunity to gain a better position on the table. It’s down to us to do our job,” Wenger said. ”

“In the Premier League the Christmas period is vital to get your points.

“We have responded well to our defeat at Man City with a win at Aston Villa, so now it’s down to us to do the job at home and get the points against Wolves on Tuesday.

“Every game has its own difficulty so what is important for us is to focus on our own game and perform well.

“In the Premier League if you don’t focus then you don’t win, so let’s focus on our next game and try to win it.

“We have learned that you win only if you are at your best. That’s the difficult, to combine the Christmas period with focus.”