Reports are out claiming that Arsene Wenger was absolutely thrilled with the performance of his Arsenal against Napoli. 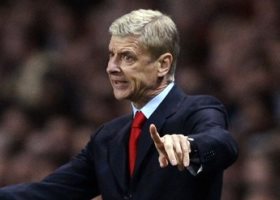 The Gunners made it 10 wins in a row in all competitions by beating Napoli 2-0 in the Champions League at the Emirates Stadium with Mesut Ozil opening his scoring account, joined by Olivier Giroud on the scoresheet.

The Frenchman was quizzed whether or not this was their best showing of the season after they swiftly accounted for the Italian club who had started their domestic campaign without defeat.

Wenger told Sky Sports : “I think so, especially in the first half. I felt that we played at a good pace technically, were direct and finished with great goals,”.

“Overall the first half was outstanding. Second half, we played more with more maturity, less drive going forward and a bit more caution. But overall it was an outstanding game.”