Reports are out claiming that Arsene Wenger was delighted to see his Arsenal players never give up in their 2-1 win over Anderlecht on Wednesday night. 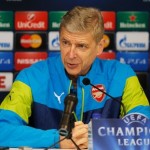 The Gunners scored two goals in the final two minutes to come from behind for a vital win over the Belgians on Wenger’s 65th birthday, just when they were teetering on the brink of defeat.

Kieran Gibbs first cancelled out Andy Najar’s 71st-minute opener before Lukas Podolski fired home an injury-time winner which allowed the north Londoners to grab a very important set of three points which has them sitting second on the Group D table.

Of the fighting win, Wenger told Sky Sports: “We looked to control the game in the first half and to control their counter-attacks as well. Slowly in the second half we opened ourselves up, were less cautious defensively and got caught.

“After that the crucial point was, when we were one-nil down, that Anderlecht couldn’t take advantage of their chance to score the second goal.

“We kept going and managed to score two good goals because we had spirit and refused to lose the game. Anderlecht played well tonight and you see that this country [Belgium] produces top class players.

“It was vital [to win] for us to have a chance to qualify [from the group]. We are in a strong position now because Anderlecht and Galatasaray have only one point and we have six, Dortmund nine. It’s down to us now to win our home games and we are through.

“It’s in our hands [to win the group]. Dortmund will be a tough opponent but you never know. Next they play Galatasaray at home, we play Anderlecht at home. Let’s first qualify then we’ll see how far we can go.”