Reports are out claiming that Arsenal boss Arsene Wenger is ready to axe Wojciech Szczesny for their clash with Swansea City. 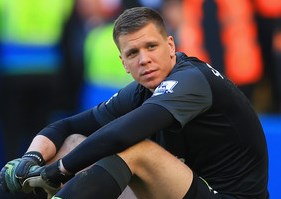 The Poland international goalkeeper let in six at Chelsea on Saturday.

The Daily Star says Wenger is understood to be considering axing the goalkeeper and playing Lukasz Fabianski in his place for the visit of Swansea tomorrow.

Szczesny did not even dive when Andre Schurrle scored the Blues’ second goal on Saturday and also flapped when Oscar scored the fifth.

There is also believed to be concern at the Gunners over Szczesny’s perceived tendency to be cocky.

He illustrated it eight days ago when he posted on Facebook a ‘selfie’ of himself and team-mates on the pitch at White Hart Lane, after their 1-0 win over Tottenham.