It has been reported that Arsenal manager Arsene Wenger is unlikely to appeal the red card given to captain Mikel Arteta.

The Spanish midfielder scored the penalty which set the Barclays Premier Leagues on their way to a 2-0 win at managerless Crystal Palace. 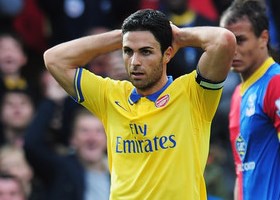 The former Everton star slotted home from the spot at the start of the second half when Serge Gnarby had been upended by Adlene Guedioura.

However, Arteta was then shown a straight red card for what referee Chris Foy deemed denying a clear goalscoring opportunity when he bundled over former Arsenal striker Marouane Chamakh some 35 yards out.

“We have a good ground to appeal. If he is only suspended for one game, I won’t do it because he is suspended for Tuesday night (against Chelsea in the Capital One Cup) and anyway I would not have played him, but it was more this game that was at stake that you worry about,” said Wenger.