Reports are out claiming that Arsenal boss Arsene Wenger urged the clubs supporters to get behind the team after they were beaten by Monaco last week. 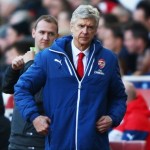 The Gunners were subpar in losing 3-1 to the French side in the Champions League on Wednesday night but recovered to produce a 2-0 result over Everton in the Premier League on Sunday.

Before the match at the Emirates, Wenger told BT Sport that he was as dedicated as he has ever been and hoped that the fans could put the Monaco aberration aside and stand by the players for the remainder of the season.

“We have always been united at Arsenal so I ask the fans to stay behind the team and show how strong you believe in the team even after Wednesday’s disappointing result,” said the Frenchman.

“In the last 25 years I’ve always finished in the top three four and that consistency has given me belief and confidence to continuing to manage at the highest level. I’m as committed as I’ve ever been to deliver success to this team.”