Reports are out claiming that Arsenal boss Arsene Wenger is eager for his players to show more discipline for the rest of the season. 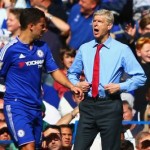 The Gunners were disadvantaged greatly in last week’s Champions League opener after Olivier Giroud saw red for two bookable offences, resulting in a shock 2-1 defeat to Dinamo Zagreb in Croatia.

Then on Saturday, Gabriel Paulista was sent off for reacting to Diego Costa’s taunts in the eventual 2-0 defeat at Chelsea which also saw Santi Cazorla given his marching orders after a pair of cautions.

Ahead of Wednesday night’s Capital One Cup meeting with North London rivals Tottenham, Wenger urged his men to take a less reactive approach in future in order to keep all eleven the pitch for a full 90 minutes, which is likely to lead to positive results.

“I believe we were unfortunate in Zagreb to have a man sent off, and at Chelsea as well, but you want your players to behave in a perfect way and not to show any response at all,” Wenger said on Arsenal Player.

“We have shown our frustration a little bit in both situations and you cannot afford that.

“We want to get back into winning habits and that is why the momentum is even more important for us.” Ozil And I Had Post-World Cup Trauma – Arsenal Defender Mertesacker