It has been reported that Arsene Wenger has implored Arsenal to continue placing pressure on Premier League leaders Chelsea. 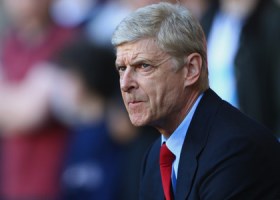 The Gunners went within four points of the Blues after beating north London rivals Tottenham 1-0 at White Hart Lane on Sunday, bouncing back from their disappointing 1-0 defeat at Stoke City in their last league fixture on March 1.

The hard-fought victory has set the Gunners up for a massive clash with Chelsea at Stamford Bridge this weekend and Wenger wants his players to remain strong as they get set for a third away match in a row.

The Frenchman said : “It gets us a bit closer to Chelsea and makes the game next week even more interesting,”.

“We are now back to four points behind, we have a game in hand and we’ve played two away games on the trot now.

“We have five games at home and we will see. It makes, of course, the next game a very big one.

“We needed the three points after a disappointing result at Stoke and I think that was still on our mind.

“Overall, we know to stay in the race it was vital to win and our away fans have been brilliant since the start of the season.”