It has been reported that Arsenal boss Arsene Wenger believes it is up to players to be responsible when they publish material on social media. 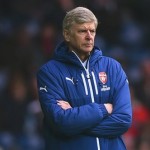 The French tactician was speaking after Liverpool striker Mario Balotelli apologised for a post which appeared to contain anti-Semitic and racist references.

“We can only warn them of the potential dangers but you cannot control a player 24 hours a day,” he said.

“They have to be responsible enough and educated to control what they say.”

He added: “The danger of social media is that you can quickly not always imagine the consequences of what you say.”