It has been revealed that Arsenal manager Arsene Wenger all but conceded that their title bid is over.

The Frenchman warned that his side had to focus on finishing in the top four after a 2-2 home draw with Swansea City in the Premier League. 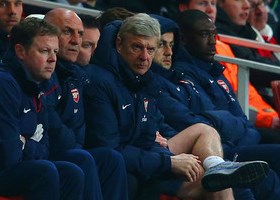 Wenger’s men started the week as title contenders but they have faltered in a 6-0 thrashing at league leaders Chelsea in his 1,000th game in charge on Saturday and a disappointing draw with Swansea after a last-minute Mathieu Flamini own goal.

Arsenal are now six points ahead of fifth-placed Everton, who won 3-0 at Newcastle United on Tuesday and have a game in hand, with a place in next season’s Champions League at stake.

“Winning the title isn’t the biggest worry we have at the moment,” Wenger said.

“We have to be realistic. We must look behind us. Everton won and, of course, now we have to focus and play the next game (at home to Manchester City).

“Manchester City had a good result tonight (a 3-0 win at Manchester United). They look a bit unstoppable. Them and Chelsea are the favourites now for the title. We don’t have too much room to come back into it.”