It has been reported that Arsenal boss Arsene Wenger would like Mesut Ozil to improve his goalscoring. 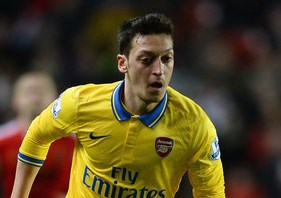 The French tactician defended Ozil after his dismal performance at Liverpool.

“What else does he need to improve? His goalscoring. You want the guy who plays behind the striker to score some goals and sometimes he is too obsessed with making the perfect pass when he could take a shot at goal.

“He needs to practise on it and we need to convince him by showing him situations where he can shoot more. The problem at the moment is that we are not practising much.

“The problem today is that you cannot practise any more. During the season, we are playing every three days, and afterwards they go to the World Cup.

“When they come back they have just one week before they are playing again. You can never improve on the training pitch.”

Premier League Is The Best In The World! – Mesut Ozil