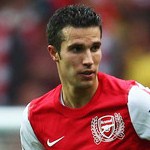 Arsene Wenger has admitted that he wants Robin van Persie to stay at Arsenal for the rest of his career.

The Dutch striker took his tally for 2011 to 30 goals with a brace as the Gunners came from behind to win 2-1 at Norwich on Saturday.

“Robin has some competitors there but he is one of the best of course,” said the Frenchman.

“He is exceptional and has something that you cannot give to people.

“For the second goal, he finished with a chip on his right foot – and I have never seen a bigger left-footed player than Robin van Persie.

“He always makes the right decisions in a fraction of a second when there is little time available, that makes him exceptional.”

The 28 year old has yet to commit his long-term future to the Gunners, with indications the Holland striker is unlikely to start any contract talks under the end of the season.

Wenger said: “My dream is that van Persie stays until the end of his career at this club.

“I will do the maximum I can to try to convince him and I hope I will manage to do that.”


Jack Rodwell Out Injured For One Month