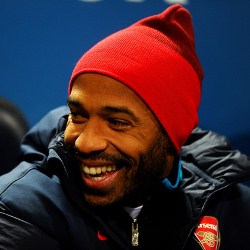 It has been revealed that Arsenal boss Arsene Wenger has hopes of keeping Thierry Henry for their clash with Tottenham.

The veteran French striker is on loan from New York Red Bulls, and looks set to have played his final game back at Emirates Stadium.

However, Wenger indicated that could yet be extended to take in the visit of Tottenham on February 26.

“I haven’t looked at it, maybe the maximum possibility we have is two more weeks. Normally no [he would not be here for the Tottenham game],” the Arsenal manager said.