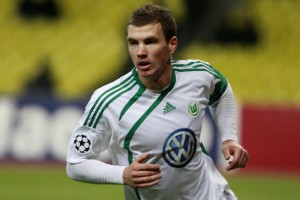 Local newspapers have reported that Dzeko is top of Gunners boss Arsene Wenger’s wanted list but Wolfsburg want £25m-plus while the striker had his heart set on moving to AC Milan in the summer when Arsenal made an enquiry in June.

However it is believed that 6ft 3 inches Dzeko, now age 23, is more open to a move to England now but Arsenal would face competition from Manchester United and Wenger believes that would price the Gunners out of the race.