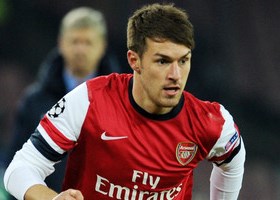 It has been reported that Arsenal boss Arsene Wenger is wary of rushing Aaron Ramsey’s return from his thigh injury.

Sunday’s north London derby had been pencilled in for the Wales international’s return following a two-and-a-half month absence.

However the Frenchman is considering delaying Ramsey’s comeback by a week given the intensity of matches against their bitter rivals.