It has been reported that Arsenal boss Arsene Wenger discussed their deal for Krystian Bielik yesterday. 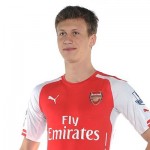 The former Legia Warsaw midfielder joined the Gunners this week.

The Frenchman said: “He’s just come from Poland, he’s just turned 17, he’s not fit because they had the winter break in Poland. That is quite long, so he’s at the start of getting back to full fitness, he’s not ready for three weeks.”

Although Bielik can play in a defensive role, Wenger insists he will play as a holding midfielder.

”Defensive midfield, without any question,” he replied, when asked on his plans to utilise the Pole.