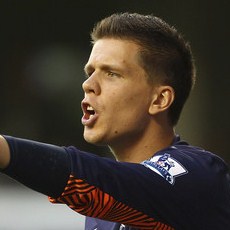 Arsenal boss Arsene Wenger feels goalkeeper Wojciech Szczesny can become one of the best in the world.

The Pole has been a revelation for Arsenal this season.

“He is one of the best already in his first season [in the starting line-up],” the manager told Arsenal Player.

“He has, like the team I must say, a promising future. We are confident that if he keeps his attitude and determination to do well he can be one of the best. ”

“I wouldn’t like to put too much pressure on him. My secret belief is that he shouldn’t set any limitations on his progress and personally I am confident that he can let other people judge how good he is.

“I have shown with my decisions that I am a great believer in Wojciech. The rest, how far he can go, I wouldn’t like to predict. That is what a career is all about.

“He is brave and that’s an important quality. You can make the goal small and yourself big. That’s another important quality for a goalkeeper. He is just at the start of his career though and you do not want to say too early that he is the finished article.

“I believe that as soon as you lose that sharpness to improve you are in trouble, no matter how young you are. That’s why I would just say, ‘keep your attitude and you will have a bright future’.”