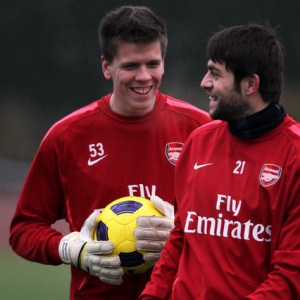 Wenger was happy to talk up the Arsenal 3rd choice keeper, agreeing with suggestions he is a similar player at least in style, if not yet pedigree, to the Great Dane Schmeichel.

“Can I see comparisons with Schmeichel? Yes, there is something presence-wise. I was very pleased with his debut,” Wenger said. “First of all, he had personality and presence. His kicking was questionable, but I put that down to nerves. I believe he has the presence and the personality. Overall, he made (Wayne) Rooney miss a penalty, made a crucial save from Anderson and you cannot fault him on the goal.

“For me, his debut was positive. Confidence is vital in our job and he has that. He turned up in front of 75,000 people and produced. That, for me, says it all. It is not easy to start your career at Manchester United in such a big game without being shaky.”