Reports are out claiming that Arsenal hero Martin Keown believes they need to find a nasty streak to become genuine title contenders. 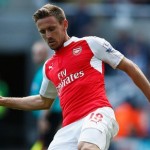 “I think they’re a little bit nice,” Keown told the Mail on Sunday.

“(Former Arsenal manager) George Graham said to us ‘you’re too nice’. You need to get round the referee, get round the players, protect your mates, and I can’t understand here why Arsenal players just do not react.

“Now, Arsene Wenger might call me a little bit crazy here, but I feel that, if you’re gonna kick me, then I’m gonna kick you and I’m gonna go and protect my team-mate. I see no Arsenal player reacting here (when Moussa Sissoko fouled Nacho Monreal), no-one’s going near it.”

Robin van Persie : I Never Thought I Would End Up As A Main Striker!