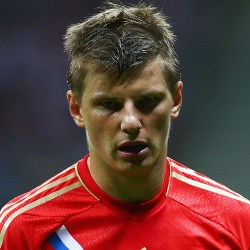 Andrey Arshavin may have talked his way out of a return to Zenit St Petersburg.

A permanent deal is in doubt after the Arsenal midfielder’s angry outburst at fans following Russia’s Euro2012 exit.

The backlash has put Zenit off completing a deal, despite Arsenal’s desperation to offload the playmaker, who they paid £15 million for in January 2009.