Mikel Arteta has told Arsenal fans that the club bring in big names before the summer market closes. 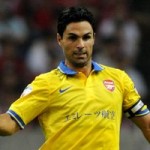 A section of Arsenal fans made their frustrations known at the lack of signings following yesterday’s 2-1 defeat to Galatasaray in the Emirates Cup.

The former Everton midfielder admits the players are also desperate for some new faces in the dressing room.

The Spaniard said : “If the club can target players who will improve the team they are going to be very welcome because that is what we want — a better team, better players to compete and win trophies,”.

“The club is working on that.

“It is in their hands and I am sure they are going to do it.”