Reports are out claiming that Arsenal captain Mikel Arteta says the entire squad are responsible for getting the absolute best out of Jack Wilshere. 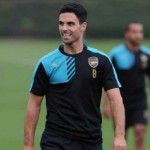 Following news that the 23-year-old midfielder is set for surgery on a hairline fracture in his left leg, Gunners skipper Arteta has indicated that it is vital for he and his teammates to continue reassuring Wilshere he has a brilliant career ahead.

“We know we cannot waste his talent because he has an amazing career ahead of him,” said Arteta ahead of Wednesday night’s Champions League clash with Dinamo Zagreb.

“We are responsible for putting that into his head every day and to not allow him to fall down because, at some stage, that is the danger; that he does not believe in himself or his body and he needs to trust himself.

“Jack unfortunately has had a lot of difficult moments, but he has shown a lot of character and enthusiasm. He needs to use it to prove he can get back.”

The England international has suffered a host of lower leg injuries since 2009 with this latest problem being his 16th separate setback according to The Telegraph.