Reports are out claiming that Mikel Arteta will reportedly be named Arsenal’s new captain. 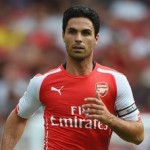 The Daily Mail reported that the Spanish midfielder will be handed the captain’s armband following the Gunners’ decision to sell current skipper Thomas Vermaelen to Barcelona.

Former Everton ace Arteta is the vice-captain at the Emirates and is an automatic choice to step into the a captaincy while Per Mertesacker is favoured to move into Arteta’s current role.

32-year old Arteta joined Arsenal from the Toffees in August 2011 and has since made 124 appearances for the north Londoners.