Reports are out claiming that Bayern Munich signing Arturo Vidal feels he now has a better chance to win the Champions League. 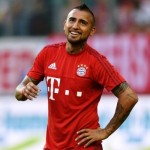 “Did we have the best midfield in the Champions League?” Vidal told Bild.

“Certainly with [Andrea] Pirlo and [Paul] Pogba we were very, very strong in that area, very talented and creative. Unfortunately, in the final in Berlin, it wasn’t enough.

“I hope I’ll have more luck with Bayern. It was frustrating, for us at Juve it was a very difficult road, and we really were on the verge of the trophy.

“At 2-1 I was sure we’d equalise and win on penalties. Fortunately winning the Copa America brought me that joy.

“The defeat against Barça had an impact on my decision to leave Turin, because every player wants to lift that Champions League trophy into the air at some point in his career.

“I have the feeling that with Bayern I can win that trophy.”